Angled Top Drapery – The Inside Story

Angled Top Drapery – The Inside Story

Creating Custom Draperies can be challenging for drapery workrooms, especially when the designer gives you a sketch
they did on a piece of paper that‘s not to scale. At Precision Draperies, that’s pretty common, and probably is for you too! Usually, workrooms quote the job based on unknown fabrics – meaning the workroom does not see them, and the designer has no idea yet what fabrics they will be choosing, but have an idea of what they’re after. It’s just one of many challenges a drapery workroom faces.

Pictures work well for drapery workrooms (as pictures are like 1000 words) to help with the design and pricing of treatments from the start.

When our designer sketched the design on a piece of paper, the design was simple, with an angled-top inverted soft-pleat drapery (D-061) with solid 36″ banding along the top, with a print fabric for the main fabric, and tied back. At fist glance, it looked simple, but there were a few twists in the project.

When we received the fabric for the banding, it was a striped fabric. (It’s very important to tell us if it’s stripe fabric and which direction you wish the stripe to go, vertical or horizontal. And most IMPORTANT of all which direction is the stripe running on the fabric.)

Originally it was 54” 0 repeat fabric (rpt). The stripes were running railroaded. (Stripes ran vertical from selvage to selvage). With the stripe running railroaded, we now had to make the banding 26” (NOT 36”) due to allowances for seaming and the angled top. This now affected the main fabric’s cut length, and also the fabric allowances for the banding.
Good news – There was enough fabric on both the banding and main fabric!

Anytime you design angled-top draperies (curtains), you MUST angle the top of the drapery to same degree as the hardware (medallions or rod) installed, in order for the drapery to hang correctly. This applies to any banding along the top edge, if the banding is to follow the degree of the hardware. Since the stripe fabric was only 54” wide, and to keep the stripes vertical without any additional seaming, we kept the pattern vertical, along with the stripes, causing the banding to be reduced to 26,” due to the trim-off allowances. This is a great example of the challenges drapery workrooms face when they’re not kept up to date with project changes. Sometimes, depending on the designer, it’s not an issue if the banding size changes.

On the other hand, it could become an issue, if the client insists on a 36” band. In either case, It’s best that the designers inform the drapery workroom of any changes in fabric content, width changes. stripe details etc. 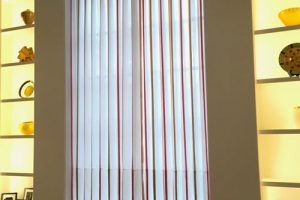 Sometimes it works to add a large bottom hem to[...] 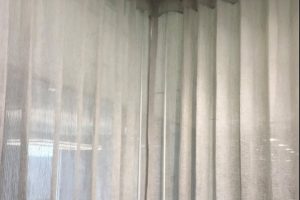 How to Hide Carrier and Tape When Using Ripplefold Draperies

Ripplefold draperies are an excellent solution for adding privacy and[...] 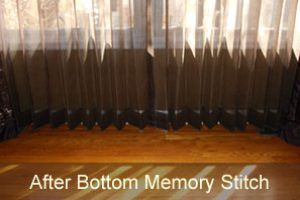 What is a Bottom Memory Stitch